The first in February 2009 issue called "Precious Metal" was about the silver dapple dilution 'Z' gene.  Since there are so few silvers the APHA
allowed writer Irene Stamatelakys to use AQHA horses in the article. Our stallion at the time, Champs Guthrie, was in both articles.  His
progeny, Solena MVF, was used to show off her white eyelashes that are sometimes seen on silver foals.  Andretti MVF, now owned by APHA
breeder - Silver Spring Farm, was shown as well.

The second publication was in the April 2010 issue.  This article was called "Believe in Brown" and was about the brown gene.  A photos of Champs Guthrie represented brown silver.

Click the photos or links below to read the articles. 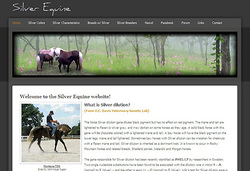 In 2006 we created SilverDapple.com  the name really didn't go over very well.  Many of the members felt that Silver Equine was a better choice.  So in 2007 and educational site on the silver dilution 'Z' gene was started - www.SilverEquine.com

Monique developed and ran the site from 2007 through early 2010.  Due to life circumstances a wonderful friend, breeder, and horse color enthusiast, Audrey managed the site.  Along with Audrey and Monique several fellow breeders helped with the Silver Equine Forum.  We are so grateful for her support and the overall support of the Silver Community.

Now with life back on track, Monique with Audrey's support, is working on and updating the Silver Equine site.  She is hoping to launch it in early January 2012.